While Jacquie was in the hospital 9 year old Corey Alteri and his friends at school showed that they believed every day by clapping down the number of days Jacquie had left until she could return home.  In memory of Jacquie, Corey’s ‘clapping hands’ were printed on postcards and sold for $1.00 each. 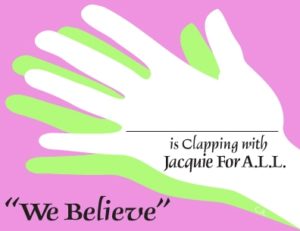 Get an inside look at the Jacquie Hirsch For A.L.L. Foundation each month.